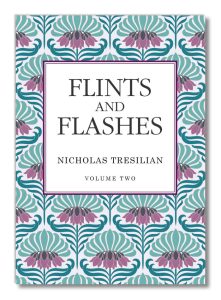 After popular demand, Nicholas swiftly followed up with another volume of his autobiographical anecdotes: Flints and Flashes Volume Two.

This book of personal anecdotes and observations is the fruit of his travels through this complex web of interests which took him all over the world and twice round it. As a result he claims to know from direct experience that the world is not flat.

Buy it here now on Amazon.

On Flints and Flashes Volume One:

‘How incredibly lucky I have been to have known Nicholas since the early ’60s and my very early days at the BBC, about the time he was creating Late Night Line Up – and to have had him in my life ever since as a wonderfully kind and knowledgeable friend – yet reading through these delightful and original memoirs, realising how much I still have to learn about his extraordinary life and many adventures.’
Valerie Singleton OBE – travel writer and television presenter

‘Nicholas Tresilian’s Flints and Flashes Volume Two manages to work to two paradigms. One is the impromptu ambassador, diplomatically bent on forging creative pathways between peoples, regions and countries. The other an excited collegiate backpacker, eager to be immersed in the intimate mores and unassuming cultural traditions as they ebb and flow in his purview. Bound by an insightful tone, his words shine bright throughout. Were this not triumph enough, some of the tales are extremely funny too.’
Keith Reeves – wine and food writer

‘“I will just read the next one…” This is what happens when you start to read this collection of extraordinary memories by an extraordinary man.’
Ann Christopher RA – sculptor

‘…his exquisitely elegant prose, entwined with a teasing sense of the ludicrous, is reminiscent of Evelyn Waugh at his finest, while his gentle mock-heroic exposure of the foibles and affectations of his interviewees in many exotic locations reminds one of E M Forster (also, of course, like Tresilian a notable BBC broadcaster).’
Ian Steadman – retired former Professor of Dramatic Art at the University of the Witwatersrand

‘The charm of Nicholas Tresilian’s anecdotes lies in their resemblance to a child’s gazing into a rock pool: but the creatures he sees there are the creatures and events of his personal memories.’
Noel White – artist

‘Each flint (and each flash!) a perfectly crafted little story that leaves you wanting more….’
Marianne Talbot – retired philosopher

‘We all know that mad dogs and Englishmen go out in the mid-day sun. Nicholas has never been mad, even when he served as an officer in the army. He’s merely invincible, a fearless traveller always in the best of spirits. He’s also one of the most erudite men I have met in a long life. This volume of Flints and Flashes reminds me again of how privileged I have been to be allowed into his company. May he go on shading us from the mid-day sun for many more years.’
Hazhir Teimourian – author of The Consolations of Autumn 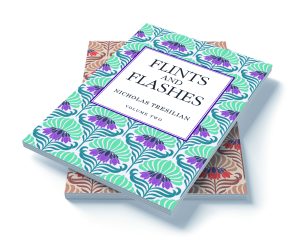